Like many other films, Staycation is another movie I just stumbled across but didn’t know a lot about until we started watching it. 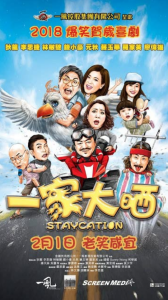 A couple’s 15th anniversary, Fai and his wife, they go on vacation to the same place he proposed to her 15 years ago. It is also the 70th birthday of Fai’s father as well. The whole family goes along. The vacation is at a holiday camp where they have to compete with other families. This is a Hong Kong movie in Cantonese.

I recognized some of the actors in this movie, not by name but just seeing their face. Evidently they are all well-known comedians from Hong Kong.

Johnson Lee Si-jit played Fai. He acted and directed this movie. I don’t know much about the actor but he was also known for Citizen King, a rip off of Citizen Cane.

Yuk-Wah So played Fai’s wife. It looks as though she has had a long and distinguished career but hasn’t done any acting jobs since this movie.

Well, where do I start, I don’t really know what to say.

The film was zany, wild and weird. Dodo birds. Flying saucers. What next? It was acted very well and I’m sure they did their best with a difficult script. If I was being generous I could say there were some touching moments. The movie is for an adult audience but at times it just got a bit creepy. I’ve not seen any Hong Kong Comedy film like this before. If I was being generous I would give it 1 out of 5. I would recommend giving it a miss unless you really want to find out what a bizarre Hong Kong movie looks like.