In a moment of madness, I thought I would review a frozen Beef Pie from Swanson’s.

In the UK I used to pick up a Tesco Steak Pie in Puff Pastry. It wasn’t frozen and was from the fridge department. It was very cheap, about 89p back then. There weren’t any vegetables in it but packed with meat and gravy. I loved it, 10/10 for their product. This is the pie I set my standards to. 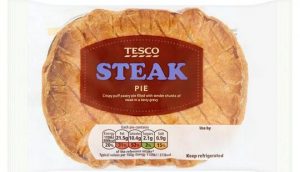 So, where do I start with this? Sigh. 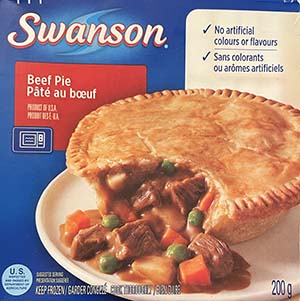 After cooking the pie, it was stuck to the container it was cooked in. It took some effort to get it out and of course, it broke into a million pieces. Part of the base was stuck on there for good, like cement.

The pastry was something like a shortcrust but kind of dry and tasteless.

The pie contents were extremely small, one piece of meat was half the size of my thumbnail; 4 pieces of meat, 2 carrots and what looked like 1 pea. It certainly was not packed as per the picture on the box. There was some gravy but not a lot. Basically, all I had to eat was pastry in gravy. That is not a pie.

This is the worst pie I’ve ever had in my entire life. They could do much better than that. I would review this as 0/10, I feel bad there is nothing good I can say about this product. It’s currently on sale here at CAD$1.50, which is $1.49 more than anyone should pay for it.

They are an American company owned by Campbells since 1955. I actually never buy anything Campbell makes, if I had known beforehand I wouldn’t have picked the pie up.

Should I Review More?

I was going to review a number of pies that I see in Canadian supermarkets to see if I can find a Tesco equivalent, however, the Swanson one has put me off doing that. I think we are safer making our own at home.