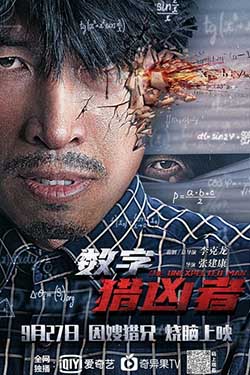 The Digital Hunter aka The Unexpected Man (数字猎凶者) is a Chinese movie that was released on 27 September 2021.

Cheng Zheng, who works in the Bureau of Statistics, and a mathematical genius, helps the police solve a crime in which he was present at the scene. The culprits are caught but another mathematical genius Ding Ruobing threatens the city with bombs unless the police release one of the crooks from prison. In order to stop three bombs from going off in the city, Chen Zheng has to solve three extremely difficult equations. It is a race against time before many people are hurt.

Han Zhao plays Chen Xheng and twin brother Chen Mo. On some websites, this actor isn’t even listed. A couple of websites state he is more well known for Directing, but he has also been a writer and acted on the small and big screen.

Liao Wei Wei (廖蔚蔚) as the wife of Chen Xheng. Evidently, she has taken part in numerous TV magic and reality shows. She has appeared in a few films and appears to have her first TV drama coming soon, called Ten Day Order.

Qi Zhi (齐志) as the police chief. He hasn’t appeared in many productions. He was in the 2020 Chinese TV show called The Moon Brightens For You.

Let’s start off by saying it wasn’t a masterpiece. It felt like a Made for TV drama rather than a Box Office film.

The story was pretty sound. I liked the idea a mathematician was tasked to save the day. There is an alleged disabled person in it. I love the scene where all the mathematicians jumped out of their classrooms, into cars, and raced to the police station; you have to see the scene to understand what I mean. There was a dramatic twist in the movie even though I kind of guessed what would happen right from the beginning. I’m not sure the media in China reacts the same way as in the movie, I expect that in the West.

There weren’t many special effects. The scene where someone was knocked over in the street was badly done, almost laughable, but I think the main focus was on the story.

If you have nothing else to watch I would say this movie is good to pass away the hours. I give it 7.5/10.

Where Can I Watch It

The movie is available on iQiyi but not sure if anyone else has procured it.