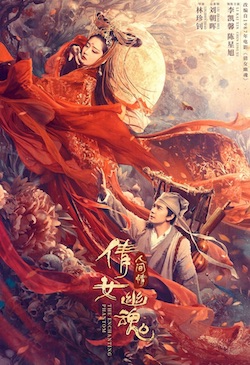 Every Sunday night is Asian Movie Night for us and this week we saw a Chinese Ghost story called The Enchanting Phantom.

A scholar, Ning Cai Chen, falls in love with a female ghost, he tries to free her from marrying a demon. The ghost, Nie Xiao Qian seduces men to absorb their life essence as an offering to Lao Lao, one of the head demons. Lao Lao orders Nie Zia Quian to get the life force of Ning Cai Chen, will she be able to do that to the man she has fallen in love with?

Oliver Chen [陈星旭] is the lead actor playing scholar Ning Cai Chen. He is a Chinese born actor, only 24 years old, and has appeared in many TV and movie productions. His character in the movie was very cowardly and somewhat over the top.

Eleanor Lee [李凯馨] is the co-lead playing female ghost Nie Xiao Qian. She is a Singapore born actress, only 20 years old, and has been appearing in TV shows since 2017. As far as I can find out Enchanting Phantom is her first film production.

I heard such bad things about this movie I had really low expectations, however, I should remember than western sites generally review Asian movies pretty badly. Internet Movie Database reviewed it as 5.6/10 but some Asian sites scored it as much as 9.0. It was actually pretty good.

It was a little thin on the storyline but made up for that through other aspects of the movie. It was very artistically done. The acting was pretty good, although a little over the top in the Ning Cai Chen character. The two demon slayer characters were my favourite, they added some more comedy to the script, it would have been interesting to include more about them in the movie. The special effects, I would say, were the best element of the movie. China has really kept up to date with the latest technology in putting these special effects out and of course, they do it in their own style.

I would definitely recommend this movie and don’t take any notice of any review sites.