The End of Trump

The vulgar Donald Trump has finally been beaten in the US 2020 election by Joe Biden, and here is a personal perspective on the matter.

Why We Left The USA

Trump was the catalyst that made us leave the US. There was a whole bunch of reasons more specifically around access to health care. Even under the Obama era the Affordable Health Care Act workflow of buying insurance was completely insane and then having access to reasonably priced treatment was near impossible. Then incompetent companies like Kaiser compounded by homophobic doctors and a broken administrative system, I had enough. Health care I knew would become less accessible and more expensive under Trump.

The Past Four Years

The Trump administration has been surrounded by scandal and corruption even when putting aside the man’s bullying narcissistic attitude. His attitude and laziness have done untold damage to the US and the world even when you look at just a few subjects:

He had promised to be an LGBTQ-friendly President, of course, I wasn’t fooled but many were.  The Human Rights Campaign listed some of the legislative attacks on our community. Many were worried about how far he would have gone in his second term such as banning same-sex marriage now he has Yes people working for him in the Supreme Court.

This has been a very stressful and trying time for our friends and family in the US, each day you never know what Trump is going to do next to take their human rights or opportunities away and back to a medieval era.

Trump is claiming that there were many illegal votes in the election and he has won, not Biden, but his attempts to take that through the court has failed, he has nothing to back those claims up as usual. He will torture people until the moment he has gone but it’s not long now, maybe this is a good opportunity to push for the criminal justice system to process him after January 20th, he must have his days in court to face his criminal activities. I wouldn’t be surprised when Biden and Harris take office they will discover some scary trails to what he has been up to. 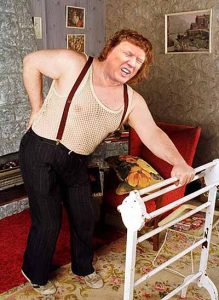 Making fun of him including the artwork people have created to attack him. If you ignore Trump he has won, he will walk all over people, best is to continue to undermine his every move. It seems that countries have learned to make fun of him too, including China of all places. He is larger than life buffoon that harms so many peoples lives, all you can do is attack him.

Characters like the Baby Trump balloon will never be forgotten. He’s association with Prep H, spray tanning his face, tiny hands, word salad, having to hold a bottle with two hands and more will go down in history as much as his failures and totally bonkers attitude. One of my caricatures of Trump to the right.

What a sad and horrible person Trump is but everyone has to look forward to better days ahead and the focus on fixing what he has broken but also take themselves forward into a better chapter of the American dream (not a nightmare). My biggest concern is Climate Change, being next door to someone who doesn’t believe it exists is extremely dangerous, I hope Biden and Harris have an extremely aggressive strategy to save the planet.