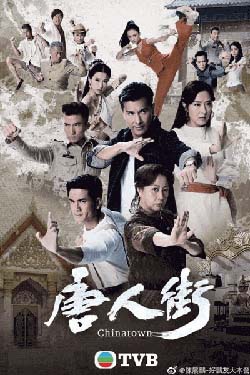 This show is set in Bangkok Chinatown in the 1960s where it follows the daily struggles of the locals and their challenges against two rival gangs.

As a result of an event in the 1930s siblings go missing due to a fight and a house fire. Years later, Bou Cing Wang meets local small-time crook Chin Chien-Chien and her mother, shortly after other siblings start turning up, or are they who they say they are? The family become entangled with gang warfare which is when they set up The Society to help locals who are affected by their evil doings.

Pierre Ngo (敖嘉年) as Gum Yiu Lung
He is not the main character but an actor who I recognize the most, he is extremely popular in Hong Kong, we last saw him in the Rosy Business series. He appears to sing as well!
Instagram | Review of Rosy Business (Pierre was in that show)

Ruco Chan (陳展鵬) as Bou Cing Wan
He’s been in so many TV shows I’m surprised I haven’t come across him before. His bio doesn’t state that he’s had any martial arts experience before but I was convinced he does from the show.
Instagram

Natalie Tong (唐詩詠 ) as Chin Chien Chien
She plays a small-time crook and the potential love interest of Bou Cing Wan. Multi-award-winning actress with a long list of TV shows and films working on a number of different projects for the future.

Joel Chan (陳山蔥) as Lin Gik
Gik is a police officer in the town and it’s not sure if he is good or bad, you’ll have to watch the series to find out. Like the other actors, he has a long portfolio of work, many TV shows but only 1 movie. Seems he started off on the well-known comedy Virtues of Harmony back in 2001. Like Ruco I was convinced Joel has many martial arts skills.
Instagram

Philip Ng (伍允龙) as Je Loi Gat
In the show, he played a character that was kind of dumb but in reality, he is a Hong Kong born American actor, martial artist and action choreographer. I wonder if he coordinated the martial arts scenes in Righteous Fists? He doesn’t have a huge list of acting roles which is why I am thinking he is more behind the scenes.
Instagram | Ng Family Chinese Martial Arts Association

Julian Gaertner as George Millen
He is a multi-lingual actor who speaks German, Mandarin, Cantonese, English and more. He pops up quite frequently in Hong Kong dramas as the butch bad guy, we last saw him in Flying Tiger Season Two. In Righteous Fists, he appears in a few episodes but I thought I would give him an honourable mention here.
Instagram | Internet Movie Database | Website

I suspect the producers of this show tried to capture the essence of Hong Kong shows of the past and they didn’t do too bad a job from that perspective. This includes the dialogue, the theme, incidental music and commercial break graphics.

It was fast-paced, over the top characters, lots of humour and equal amounts of action. It was a good combination.

The set: I swear I’ve seen that set in another drama, but that’s ok, they did dress it up to look like a Chinatown in Thailand, which was mainly some minimal Thai signs. The sets included the main town, the homes (good and evil guys), nightclubs, The Society hall, and so on, quite a few indeed.

The action: I was convinced at least some of the actors had some martial arts skills, this part was very well done. The special sound effects during the fighting scenes were quite funny and reminded me of the 1960s Batman TV show. A lot of the main characters would get hurt quite frequently but it didn’t take them long to recover without scars, must have had great doctors back then.

The acting: The actors in this show delivered an impressive performance. Seems most actors had a good role to play, I hope they had fun with it. Many of them seemed veterans in the industry.

What I didn’t like: Throughout the series, whenever “Hong Kong” was mentioned we were always reminded that it’s part of “China”, it felt ridiculous. It felt the series didn’t have enough Thai culture in it. In the final end, they left it until the last 2 minutes of the last episode, in which they decided to knock someone off, kind of like being hit by a brick wall.

I noticed many people gave the show some really bad reviews, I think it was under-rated and better than the fan scores. I will give it 4 out of 5.