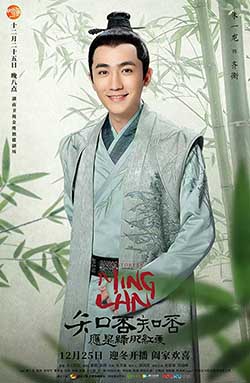 I was actually looking forward to watching The Story of Ming Lan, a highly popular Chinese series broadcast in 2018, but gave up after episode 4.

Ming Lan’s mother dies at an early age and is raised by her paternal Grandmother and in order to survive the family uses methods to hide her genius. She then meets Gu Ting Ye, the second son of a rich marquis household who is supposed to be the heir to a fortune and a title. Both of them work together to correct the injustices against them.

Having watched Guardian, which I will review soon, I discovered this show by looking up actor Zhu Yi Long.

Some of the other cast members look familiar but haven’t spent time digging into them.

The first two episodes were dull as dishwater. The third episode gave me some hope that this would turn into an exciting series. Episode 4 continued along the same vein as 1 and 2.

The first four episodes were centred around wives and concubines who were constantly moaning and nagging throughout most of the episodes. In fact, most of the adults were completely deadbeat, useless and dysfunctional leaving the younger characters to pick up the mess. I got the feeling this was how the drama was going to continue. The relationship between wives and concubines may have been that way but it didn’t work well when it hit my brain.

The nagging and moaning took up quite a bit of episode 4 that I actually fell asleep during it. Since this is a 73 episode series I just couldn’t justify my time attempting to get through it.

However, other people do give it positive reviews so don’t be put off by me, go and check it out for yourself should this sound like a show you would be interested in. Since I didn’t see all the episodes I won’t rate it.