Tiger Cubs is a TV series from Hong Kong that was broadcast between June and August of 2012. 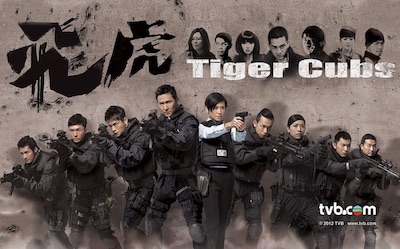 The show follows the lives of the Special Duties Unit (SDU) branch of the Hong Kong police department, as known as The Flying Tigers. Although the main focus is on solving high profile crimes the show also covers the love life and other drama around the characters.

Oscar Leung: The reason why we watched this show was because of Oscar as we have followed some other shows he has been in, such as K9 Cop. He was born in Hong Kong on 26 March 1979 and appears to have been in demand since his TV career started in 2004. He seems to be more of a character actor as his personality is quite adaptable to numerous rolls; serious, comical, evil, camp and so on.

Other significant cast members include:

Joe Ma: Joe was a member of the G4 prior to his acting job. The G4 is the Hong Kong VIP protection police. Following a modelling gig, at the suggestion of G4 colleagues, his acting career began in 1994 and seems to have been busy ever since. Joe plays the trainer and leader of the SDU team.

Jessica Hsuan: Like Joe Ma she played a significant role in Tiger Cubs with much of the storyline centred around the troubles of her character. As she a very sought after actress in Hong Kong, and moved on from her contract with TVB, she only appears in one season of Tiger Cubs.

The first season was very well produced with lots of action done in the typical Hong Kong fashion. The production company must have put a lot of effort into the action sequences as they were very exciting and on-the-edge-of-your-seat with a gripping music score to boot. Most of the characters were developed really well and there wasn’t any of them to dislike. Even some of the criminals one felt sorry for. The continuing storyline of Jessica Hsuan’s character, and how it interacted with the sub-plots, was very well outlined from the start to the penultimate episode ending the season on an interesting yet comical note.

This is an absolute must-see Hong Kong drama, especially if you’ve never seen any others before.