We never heard of this film before, it was recommended by someone in Shanghai that I have been communicating with.  I am pleased he mentioned it to us. 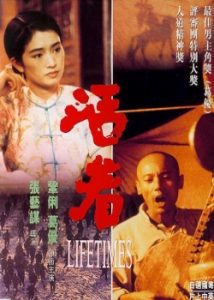 The family themselves go through gambling addiction, going from rich to poor, surviving off doing menial work, forced into nationalist and communist armies, and coping with political turmoil.

I have to admit I have never heard of any of the actors from the film.

I’ve not seen a bad review of the film, and most award it very high ratings.

It was a very engaging and thought-provoking film which views the period of China from a different perspective that many may not have heard about. It must have been a tough period There was some humour in it but certainly wasn’t really a comedy as such as one disaster after another had befallen the family. It was interesting to see how the family adapted to the environment that they were given, although I’m not sure people in the west could have accepted that form of autocracy. I guess they had no choice.

The acting was very convincing, I can see how the actors put everything into their roles. The sets were very well built. The only period during the movie where they had an opportunity to show off any cinematography skills was during the war scenes, very well done, will a cast of a couple of hundred I assume – didn’t look like CGI.

Since the film was recommended to me by a Chinese person I wonder if they consider it a classic? It was certainly memorable and I would pass on the recommendation to other people. There is one distressing scene in the movie so I would give it a slight health warning, maybe for over 18s only. I would rate it 4/5. Due to the nature of the film, I would not want to see it again.