Train is a very impressive TV show from South Korea about an interdimensional detective trying to solve a 12-year-old murder case. 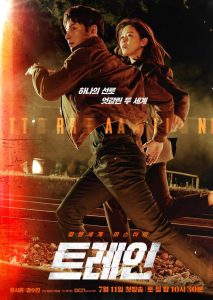 This is a basic summary of the show:

“Haunted by the thought that his drunkard father killed another man before also dying on the same day and not paying for his crime, Seo Do Won lives his life trying to secretly repay Han Seo Kyung for his father’s sin while hiding the truth. He is now a detective who overworks to escape his guilt, and she is a prosecutor who is still looking for her father’s killer.”

It is so much more than that and I don’t want to give away the plot too much, but there is a mysterious train that travels to an extraordinary place.

I only recognized one supporting actor in this show, the main actors I hadn’t heard of. They all did an amazing job, most of them played two different characters.  The main actors were:

The actors I had heard of was Kim Dong Young. In Train he played Kim Jin Woo, a detective, but also saw him in Let’s Eat season 3.

The drama was more gritty than many we have seen from South Korea tv. The cinematography was very good too as it had to reflect a darker image. The Train special effects were ok but they probably could have thought that out a bit more. The general storyline was well planned, it was very fast-paced and kept everyone on the edge of the seat. The part of the story where the train took one person to a mysterious place was good but the missing part of the script was what happened to the other passengers. Some parts of the story weren’t well planned where you were kind of left guessing what just happened. Usually, in Korean dramas there is a lot of romance, that wasn’t central to the script in Train.

Could there be a season 2? Probably not, seems the story had more or less been wrapped up but I guess there would be potential for something else. So, I would rate this 4.5/5, the missing point is for the little oddities in the continuity that they could have cleaned up pretty easily.