This feels like a “here we go again” with Mr Trump who makes inflammatory comments without thinking things through or have any facts to back them up.

So, today started off like any day for Mr Trump and that is watching Fox News aka Trump TV.  On it was much hated British politician Nigel Farrage who said that the NHS is in crisis due to immigrants flooding in and not enough staff to back it up.  Then shortly after that came this: 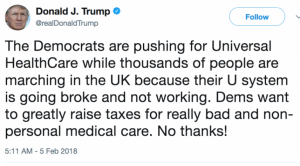 Trump supported Universal Health Care but since he ran as a President on the GOP ticket he has been against it. Its not the first time he has made anti-NHS statements when really he doesn’t know anything about it. He doesn’t form his opinion by normal methods, such as reading reports from advisors, but by snatching sound bytes through Fox News and this should not be a methodology that decides the future of the US.

The NHS isn’t perfect and there is no healthcare system that is. The NHS are going through a tough period through various reasons such as short staffed due to Brexit and mis-management by the Conservative Party.   The conservatives have always wanted to privatize parts of the NHS but so far hasn’t worked out very well, for example Virgin taking legal action against them for £2m for not winning a contract. However British people love the NHS and an attack by Mr Trump feels incredibly personal.

Many countries have different needs and will have a model that supports that. So in reality the NHS or Canadian model might not meet the needs they have in the US.  However, Americans tend to look at the UK to write off Universal Healthcare in the US even before discussions have taken place, and before any draft strategy documents are written up.

This decision process, or the lack thereof, is heavily influenced by private companies in the US, big bucks going to legislators from healthcare and pharmaceutical companies. So, its very difficult to fight for universal healthcare, or even bring it to the discussion table, when Americans are being influenced by huge propaganda campaigns by these companies. Also, the US is an extremely divisive country right now, and has been prior to Trump, from one end of the spectrum to the other, in other words no one talks to each other.  Its tough to get anything achieved in this environment.

So, I don’t really know what will happen in the long term, certainly under Trump life will get worse for those with healthcare needs in particular rising prices. People might have some minimal advantages under the new tax reform bill but any money made there will be a drop in the ocean to pay the different in healthcare costs. Blaming the NHS will get Trump nowhere except make the country more divisive which I assume must be on his agenda, the more chaos he creates the more he is on the news. I feel sorry for him and the American people.