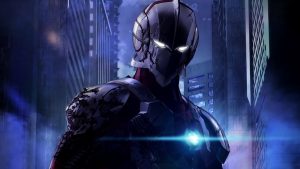 Ultraman is one of the most significant brands in Japanese entertainment so I was very intrigued to see the Netflix version of the show, and I wasn’t disappointed.  This is my review.

I can’t describe Ultraman better than what the Ultraman Wiki has so nicely laid out for us, however, he defends the Earth against aliens and monsters who don’t appear to be in short supply. The Ultraman industry, which started in 1966, even though it is thought that the character is actually 20,000 years old, has generated significant income in the billions. This was the first episode that aired back then:

The new series, commissioned by Netflix, appears to take on a slightly different slant. The “new” Ultraman is the son of the original but also we find there is, in fact, other Ultramen. The 2019 version is more elaborate than it’s originals, probably the most technically stunning that has been produced so far, not the usual format this time of genre from Japan.  This new series has 13 episodes in total.

Story: The series is really engaging not just from a technical perspective but the story is sound too. It actually reminded me of many super-hero comics rather than a classic Ultraman story with a child growing up to discovering he has super abilities. The part where the new Ultraman is facing tough decisions to destroy evil aliens as told to do against what humanity has taught him to bring people to justice rather than kill them is a good story arc.

Look & Feel: Visually the series is absolutely stunning, I was just amazed by the attention of detail to the artwork which was difficult to find fault with. It really puts all other Ultraman series to shame really, however, I am sure they don’t have the budget to produce this high quality work.

Overall: 13 episodes didn’t feel enough but I am pleased a season 2 has been ordered. I would give it an 8.5/10. I think this is higher than other people have given it.

This is the Netflix trailer:

Started this year is another Ultraman series called Ultraman Taiga. Not as visually stunning as the show on Netflix but might be worth watching if you are a fan.