When you travel around or have lived in 3 different countries as I have, you realise international brands aren’t the same everywhere.  This is definitely the case for breakfast cereal Weetabix. This is a comparison against Weetabix UK and Weetabix Canada.

What are the brand differences? 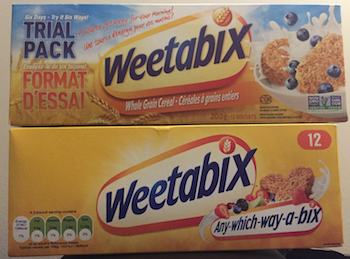 In the picture to the right, the Weetabix on top is Canadian and below is a box I bought from Tesco in the UK.

The UK is going for a more minimalist branding on Weetabix boxes with plenty of blank space at the moment, at least on the one I picked up. I have seen better designs in recent years and personally prefer it when they are busier.

Canada suggests their 12 size Weetabix product as their introductory first-timer marketing solution, at least that’s how it looks.  Rarely do I see boxes of 12 in Canada apart from in this format and I’ve only found them in London Drugs. They always have a $1 off coupon for their 24 size boxes, definitely worth picking up.

In the US Weetabix product placement usually goes in the “healthy cereal” area not among the American-style cereals which are generally full of sugar and other rubbish.  In Canada, I notice they are mingled in with the American cereals and aren’t so noticeable as generally, they don’t place them to sell well, usually in the uppermost shelf and only a 1 box row. There is an exception at London Drugs who often display them in the aisle rather than on the shelf or in a prominent position on the selves.

Here is one of the Weetabix UK commercials which I recall seeing before:

I don’t actually recall seeing any Weetabix commericals in Canada but there has at least been one:

I have not seen larger size boxes of Weetabix in Canada (ie 48 and 72) to do a comparison against the UK. I would prefer to buy larger boxes if I can assuming it would be a bargain for me to do so.

Many might think that Weetabix tastes the same no matter where you buy it, but this is not the case.

The Canadian box states that it is manufactured in Canada. The UK box doesn’t say where it’s manufactured but does state it contains 100% British wholegrain wheat. It’s difficult to assess if the nutritional facts are the same due to how differently each country displays them on the packaging.

I would pay a higher price for the British product. Some specialist stores in Canada do sell the British version of the product, just like they sell other products that have Canadian equivalents, however, they are very expensive to buy, as though I have paid full price for them to be shipped all the way from the UK.  I guess British people know the difference between UK products and their Canadian equivalents.

I wish I had bought more British Weetabix back with me from my trip. Oh well. Where ever you buy Weetabix it’s still a great product and recommend you try it if you haven’t done so already.