In the twilight of the Ming Dynasty, the Imperial court is plagued by corruption as tyrants rule over the land. That is at least the Internet Movie Database describes this movie in its first sentence. I expected the worst but was quite surprised that this movie wasn’t too bad at all. 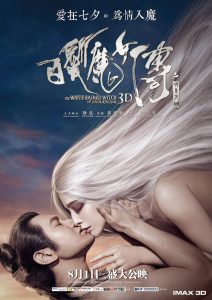 The White Haired Witch of Lunar Kingdom (白发魔女传之明月天国) is a film released on 25th April 2014 and made in China.

This is a better description of the film that I found:

“Based on the classic martial arts novel by Liang Yu Sheng, it evolves around a pair of star-crossed lovers – a devilish outlaw, The White-Haired Witch, and the righteous Taoist leader, Zhuo Yi Hang and their love that could change the fate of the nation.”

I understand there are two other adaptations which I haven’t seen:

Only recognized one of the actors.

The first thing I noticed about this film was the amount they packed into it and the level of detail, they must have gone to so some trouble putting it all together. The storyline was sound with some twists and turns. Some of the photography, and scenery, were very good and the special effects weren’t bad for a way back in 2014. I thought there were some moderate saucy bits for a Chinese movie, more open than I’ve seen before. I can probably see why some people didn’t like the ending, I won’t say anything about it here, it wasn’t what I was expecting.

If you want to see it the movie is available on Viki but you will need to be a subscriber to the site.