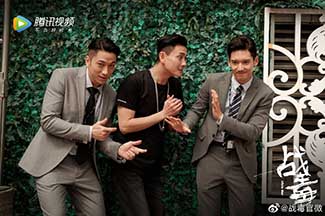 White War (战毒) is a TV series from Hong Kong at aired between 9 July to 1 August 2020 and big-name stars Bosco Wong and Ron Ng.

Ching Tin, Wai Chun Hin and Hui Sau Ping grew up together and all joined the Hong Kong Police Force together. One of them stays loyal to the force. While undercover one separates from the police taking up a life of crime. The other is framed by a gang pushing him in the direction of crime to pay for his debt and fathers’ medical expenses.

Meanwhile, the drug war intensifies as they are starting to be sourced from Thailand taking the war onto a different turf.

Bosco is hugely popular and has appeared in many movies and TV shows. We know him best through a comedy film and TV shows K9 Cop, Flying Tiger seasons one and two. In 2008 he signed a singing contract with East Asia Music, although he is more well known for his acting.

Another very much in demand actor, he was voted as a Super Idol by TVB. He started off as a dancer which led him into a singing career then acting. He have seen him productions alongside his friend Bosco Wong such as in Flying Tiger seasons one and two. Ron has sung many tracks to TV Themes.

Kenny Kwan was born in the Philippines but raised in Hong Kong, he is a singer-songwriter. He is signed up to the music label. Emperor Entertainment Group. He is also in much demand as an actor. White War is the first production I’ve seen him in. He is in the same age group as Ron and Bosco.

The start and end of the show were the most exciting, but the middle part was most difficult to get through. It seemed terribly slow and the script repetitive in the middle. At the halfway point I thought I was going to see the pace quicken but alas it didn’t. The last few episodes, especially 29 and 30, were the best and there was a lot packed into the last episode.

The most annoying part of the show was the voice over for Zhang Ya Zhuo (张雅卓). One could tell it was a voice over since all the background noise vanished. Since she is from the Xinjiang region of China I wonder if she couldn’t speak Cantonese. It seemed there was another actor that had a voice over too, a minor role, but he did appear in several episodes.

The plot was ok, like other dramas it made Hong Kong look like the drug capital of the world controlled by rival gangs, some bigger than the other. In between of course we had the back and forth of romantic stuff. There was humour at the beginning and the end but that kind of sidelined in the middle.

The series should have been cut in half to 15 episodes and the story wouldn’t have dragged so much. I do understand they had some difficulties meeting the demands of the censors so I’m not sure if they had to chop and change it.

I understand both Viki and Tencent have it, both with English subtitles.