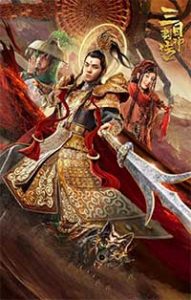 I came across this film by accident and we watched it this past weekend despite not knowing what to expect.

As in other Chinese movies, there are a number of interpretations as to the title, I saw it being advertised as Three Eyes but in the movie, it said Yang Jian Legend.

The great god Erlang needs to eliminate the devil before he can ascend to be a fully supernatural being. At least that is my loose interpretation of the movie.

In the village, one of the occupants would always believe Erlang would appear one day but no one believed him and was on the lookout for a boy being born, but birth after birth it was only girls. Until one day….!

Due to the lack of information about this film, I couldn’t find out any information on the actors appearing it in, apart from:

Xu Chang Chao (许长超)
He didn’t even play the main lead, only a supporting cast.

Dammit, if only my Mandarin was better!!

The movie was mainly comedy, which we weren’t expecting. It was partly slapstick and a comedy of errors. I suspect I was laughing during scenes that weren’t mean to be funny, the whole premise and setup were very amusing. I think the British and Chinese sense of humour is very close which is why I enjoy these films so much.

It came across as a Made for TV movie rather than a big-budget one made for the cinema. There were a lot of special effects, some were good, some were cheap and dirty. The acting was pretty good, especially the comedic scenes.

In the end, there were serious moments and had the “guide to life” message often portrayed in these type of Chinese films. I don’t regret seeing it, it wasn’t a waste of 1 hour 36 minutes at all. Good entertainment.

This film can be found on iQiyi but behind a paywall, a subscription required.