Yolk Man (蛋黄人) is a Chinese television serial that was produced by iQiyi and broadcast between 16 August 2019 through 30 August 2019. It consists of 12 x 20-minute episodes. 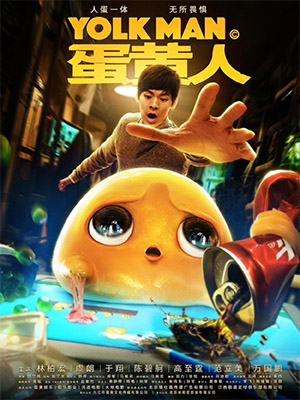 What is it about?

Note: Spoilers Ahead
Yolk Man center’s around the main character of Li Zhi Yuan, a dysfunctional college student who not only loses the love of his life but is then diagnosed with cancer and has 3 months to live. An alien life form then inhabits his body, suppresses the cancer and gives him super human abilities. However, while the good alien inhabits Li Zhi Yuan an evil alien takes over another body that is controlled by a hive.

Austin Lin plays Li Zhi Yuan. Austin is a Taiwanese actor whose career started on the singing competition “One Million Star” from 2007 and has appeared a quite a few TV and Movie productions since then. You don’t have to look to far on YouTube to find many shows that Austin has appeared in.

Out of the box iQiyi provide English translation for the show embedded on the video. The translation text was very clear. However, I notice that the network gave English names to all the characters. For example, the main character of Li Zhi Yuan is now Jim.

Each of the actors gave brilliant performances and each character had their own form of “kick ass” opportunities.

China has marked this series as age group 15+. I’m not sure if it would have received the same rating in Canada, UK or US. Maybe lower.

The show is absolutely brilliant scifi with very high production values and some comedy thrown in. The special effects are excellent especially of the good alien who looks like an egg yolk, hence it being named Yolk Man. There is a decent amount of action so each episode is exciting, you are not likely to fall asleep during the show. The show is structured like an episodic scifi from the west with a brief intro, the theme music, a cliffhanger and closing theme. The final 2-3 episodes were the best with a showdown of the alien entity.

Like numerous Chinese shows right now there is a hint of a gay relationship. I notice networks are pushing the limits and including themes like these which, to me, gives a lot of hope that China is joining the rest of world. I really respect the producers for including this content.

There isn’t a particularly happy ending but there was a surprise after the closing theme of the last episode. This made me curious about the potential of a 2nd season although I haven’t seen any hints of one online. I hope so.

Where can I see this show?

Easy, the full 12 episodes are on YouTube, thanks to the network for putting it there.

We have since seen Austin Lin (林柏宏) in I, WeirDo.